Organic BAKES & MIXES. Freshly Prepared and Made to Order.

Keto life really doesn’t have to be uninspiring and repetitive. This delectable, complete, gourmet keto meal contains just 6g carbs in total. And you’ll be surprised at how easily it comes together.

This leafy member of the cabbage family has several names, including pak choi, bok choy, Chinese celery cabbage, horse’s ear and white mustard cabbage. It has either white or very pale green, short, chunky stalks, with glossy, deep green leaves. It’s the most widely used vegetable in Chinese cuisine and you can eat it raw or cooked. Pak choi is delicious, packed with nutrients and very keto-friendly, with just 1.9g net carbs per 100g.

If you can’t get pak choi, or you’d prefer some other green veg, feel free to swap. Spinach would be a great low-carb alternative, for example.

What is Celeriac and is it Keto-Friendly?

It’s a root vegetable, with a sweet flavour and a hint of aniseed. And yes, it is keto-friendly. Unless you consume tons of it in one go.  It contains 2.3g net carbs, which is much lower than other vegetables that are commonly considered suitable for the keto lifestyle.

Plum Compote? Plums are not Keto! Or Are they…?!

One of my pet hates is reading comment on social media that this and that isn’t keto. Such utter nonsense! Categorising something as keto or not-keto is a most ridiculous concept. Ketosis is a metabolic state, induced by lowering carbohydrate intake, not by eating specific foods. Let logic and common sense dictate what you eat and how much, and you’ll love keto life so much more.

Now, compare that with blueberries, the omnipresent darlings of the keto community. Same 50g, split between two servings, would work out as a very meager portion of about 4-5 blueberries. Which, by the way, is a tiny fraction of what the average person might consider a ‘serving’. Net carbs* = 2.25g (rounded down) per serving.

And that’s where I shall leave it.

With 4 separate elements to cook, you will no doubt expect this meal to take many hours and a lot of effort. Wrong! Trust me when I say that each one is a cinch.

Want to save time? Make the celeriac purée and plum compote in advance. I won’t bore you with repetition. Just check out the recipe instructions and enjoy your gourmet keto feast!

You can save this recipe or any recipe you ♥ to your Yummly collection. Scroll past the recipe box and you’ll see the button ↓

Using the quantities stated, you'll you will end up with 600g of prepared celeriac purée, but you'll only be using 200g (100g per serving). Cover the remainder with cling film, keep refrigerated, and serve with other meals, for up to 5 days.
For less washing up, line your roasting pans with foil.
Strain and keep the duck fat from your frying pan. You can store it and use it for roasting veggies to make them taste amazing.
Unless otherwise indicated, use Metric Kitchen Scales to measure ingredients accurately (U.S. option HERE).

QueenKETO is a participant in Amazon’s affiliate advertising program. Clicking on a product or ad will re-direct you to the Amazon site. For your purchases, I may receive a small fee, which helps buffer the cost of maintaining and improving this site, at no extra cost to you. 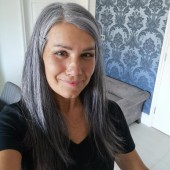 Hi! My name is Antya. I have always been passionate about great food, with a particular fondness for Italian cuisine. Here I share my KETO transformations, some completely made up and some inspired by my own heritage, cookery books and amazing foodbloggers. Read More »